"How dare you gonna inform Chairman about this. As a result, this is your punishment.... You fool!"
– Chika warns Sayaka about her action in her flashback, Chapter 133

Chika (チカ, Chika) is a mirror character introduced in third part of story. She is former Sayaka Shiiba's partner and an Idol.

Before the events of Real Account incident, Chika always having sex with her producer. One day, when Chika having with sex with her producer, Sayaka Shiiba accidentally saw them doing such thing. Sayaka think this is not good action so she decided to tells this to the chairman. But due to Chika wants to protect her name and fool the chairman, it's said Sayaka is the one who having sex with the producer instead.

When Sayaka returned to the concert, Chika while acting as she worrying her, she gives a warning that this is her "punishment" for informing her sex activities to the chairman. Although most of Sayaka's fans believes that rumor was fake so they has already forgot about it. Because of Sayaka's popularity keep raising, it makes Chika hated Sayaka even more. 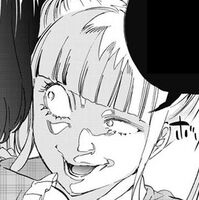 Retrieved from "https://realaccount.fandom.com/wiki/Chika?oldid=7234"
Community content is available under CC-BY-SA unless otherwise noted.