Daiki Kujima (九島 ダイキ, Kujima Daiki) is a mirror character and one of the antagonists introduced in third part of story.

Daiki first appeared at Chapter 72, he is chosen as one of the 30 players to be play at Real Account Tower.

When the first trial was revealed, Daiki was so scared at how high the tower is. Shuu Kuze tells Daiki to be claim and don't scare but Daiki said he can't. After seeing Yuuma Mukai and some other players standing in the invisible road, along with other players were also started to walk around. After the difficult is increased, Daiki was almost fall-off from the road but he was saved by Akuto Saejima. Akuto stated he and Akuto need some teamwork in order to continue the trial. Soon, along with Akuto was successful to finished the Smartphone Maze Walk trial.

During Real Account GO trial, Daiki comes to locked Yuuma and Magura Aizawa's movement with using one of his Pocket Monster, he using this to catch all the Pocket Monsters on the cave all by himself. Although Daiki got annoyed by the Swagger Mouse keep showing up, Yuuma uses Electric Girl to shocks Daiki after being free from the lock. Later after Mikiya Sadamasu calls all players to do a summon event, along with other players was joined the event. During the exchange, Daiki was in attempt to steal Yuuma's Pocket Monster but it's stopped by Mikiya. Later, Daiki was killed by Planning Department Chief Marble due to he fall into his trap.

Later, Daiki appears as one of the NPC characters in Fake News Island. Daiki used his special ability to transformed himself into Akuto, in order to kills Karua Sakurame and Mamoru Nirata. When Karua and Mamoru seen "Akuto" (Daiki in disguise), it's showed that "Akuto" was catching all of the fakers out of the island. "Akuto" then having a conversation with Karua and Mamoru for a long while, until Karua realized that "Akuto" is actually Daiki in disguise. Daiki is wonder how comes Karua able to know that he's fake Akuto, she replies that she feel angry that he never calls her by her real name. It's also revealed that Daiki captured Kirika Sakuragawa, who is the actual helper of the island. 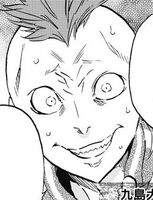 Retrieved from "https://realaccount.fandom.com/wiki/Daiki_Kujima?oldid=7386"
Community content is available under CC-BY-SA unless otherwise noted.