"I see...... Don't be scared... right... I'm not scared! After all, these guys don't have what we needed to survive in that place where we stayed until yesterday... The resolve to risk your life!"
– Haru Ichinose after seeing Yuuma Mukai and Mizuki Kurashina's actions, Chapter 43.

Haru Ichinose (市之瀬 ハル, Ichinose Haru) is the character introduced in the second part of the story.

Haru has cat-like short hair and a little bit small eyes. As a 3rd graded middle school student, she wears the white and navy and long-sleeved sailor uniform with a red necktie, a navy skirt, white socks and brown shoes. Normally, she wears a jumper, a patterned skirt, striped stockings and plain sneakers as her casual outfit.

Haru is a soft, silent and coldblooded girl and she carries a note pad around with her to takes notes on almost everything that happens.

Haru first appeared at Chapter 33, she joined Big Flame Festival game along with Yuuma Mukai's group. After the phone was are exchanged, Haru think reading private message from other people's smartphone is forbidden and she also noticed a lot of people are started to showed interests at reading someone's private message, though she takes note about this for her future novel ideas. After Hayato Kanou revealed Haru's private message about she being fake advertising a lot of books in online, she acts claim while being shake. Soon Haru revealed Kirika Sakuragawa's second shemale photo in public.

After Big Flame Festival is finished, along with the rest of the players was sent back to the real world and started the new game named "SNS Hide-and-Seek". When Haru saw Yuuma coming in front of her, she jumps onto the motorbike but accidentally have him saw her "place". Haru tolds Yuuma to forgot everything about her fake advertising and her "place". Soon, both Haru and Yuuma was surrounding by the hunters, she tried to defending her "Marble marks" but she feel it's hard to do so and scared at those adults. After Seeing Yuuma and Mizuki Kurashina works together to fight against the hunters, Haru thinks this is nothing to be scare and think as a Real Account player she must have be prepared to survive, she saw a large nail in her right side and used to insert the hunter's hand and phone and survived.

After being survived from gang attack, she can't believe she is survived and think Yuuma and Mizuki is reliable Real Account players. Soon, Haru tagging together with Yuuma and Mizuki and changed their clothes. During Mizuki driving in the van and both he and Yuuma being quarrel, Haru shows to be interesting at them and she think "Yuuma x Mizuki" is a great gay idea, and she also takes note about them into her note pad. Haru thinks after Real Account events is ended, she will write a story about Real Account incident into her future novel, she also think she must have to be survived and believed Yuuma and Mizuki are able to do so. Shortly afterward, Haru is killed by a mysterious zombie-like "Marble". After the van being exploded, Haru's headless corpse is burned inside it.

Haru as a middle school student 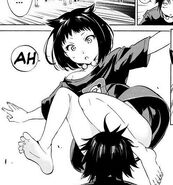 Haru jumps onto the motorbike ridden by Yuuma Mukai (Chapter 43)

Haru takes notes from what Yuuma and Kurashima talk

Haru in her casual outfit (Chapter 45) 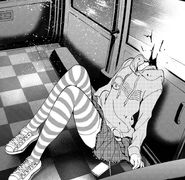 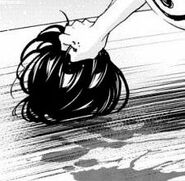 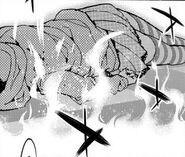 Haru's headless corpse inside the van before the explosion 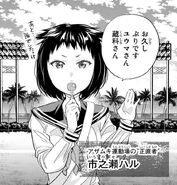 Retrieved from "https://realaccount.fandom.com/wiki/Haru_Ichinose?oldid=7392"
Community content is available under CC-BY-SA unless otherwise noted.