Kanata was originally an singer, during his career he is somewhat popular. Until sometimes later, Kanata has been wronged by the people in the internet that he is the famous Peeping Tom who always watching the high school girls naked or changing clothes in the school toilet. No matter how hard Kanata tried to explains he's not a Peeping Tom, none of the people believe his words. Because of this, Kanata lost his career as a singer and has be trashed by other people since forever, Kanata only live in his house and never leave even once which caused he slowly become fat. Then, Kanata hidden his true name to not having people know he is the Peeping Tom that the news keep referring.

After Real Account GO is finished, Yuuma Mukai and the others are making a funeral for the players who die in the game. During the funeral, Kanata sing a song for the dead.

During 24 Hours Unscrupulous Hunting Campaign game, Kanata is tagged with Magura Aizawa. Later, after Kanata and Magura meet Zui Zakuro, they have no choice but joined Zui's group.

During Zui fight against Yuuma, Kanata and Zui's other teammate was watching the match. When Zui can't holds on anymore, Karin Koma tried to asked Kanata and the others to helps him but they don't want due to they didn't want to losing their points. After Zui is defeated, along with the rest of the players who was in the factory was having their points steals by Hako and Aiji Hoshina. Kanata and the others are thinking how to regains the points, Yuuma found a new plan to regains the points and it's successful. After the game is finished, along with Suzuri Mikura, Rion Shikijiyou and Shuu Kuze was requested Yuuma to become their leader and he accepted. After Ataru Kashiwagi revealed Yuuma was suffered an "symptom" and showed Yuuma's "berserk form", Kanata and the others were scared at Yuuma's action.

One day after the fourth game finished, the fifth game is started with every players wears school uniforms. After Karin leaves the girl toilet and said she must voted Yuuma in the next round, Kanata appeared in front of Ayame Kamijou and asks her to help him to leave from the box. Ayame thought Kanata was pervert but Kanata deny it and said he is not. Kanata revealed his terrible past to Ayame and said even if he die no one will care anything about him, but Ayame disagreed with this and said even Kanata live in a terrible situation he still try to survive the situation. Kanata listened it and he want to thanks Ayame for her words. When Kanata discovered Ayame was claimed to be Chairman Marble and she only have 10 minutes of life-span left, Kanata tried to save her to wears a school girl uniform and saying he is the Chairman Marble, everyone was scared at Kanata and voted him. Soon, it's revealed Kanata isn't the Chairman Marble and being freezes into a ice. Before Kanata is killed, he sent an record voice file to Ayame and said he is glad that he meet her.

After Kanata's death, Ayame opens her smartphone and listen Kanata's last words for her, which it's a song that hopes Yuuma and Ayame able to survive and tells them don't give up. 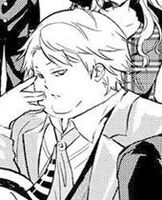 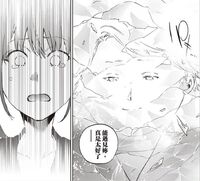 Retrieved from "https://realaccount.fandom.com/wiki/Kanata_Hidzuki?oldid=4853"
Community content is available under CC-BY-SA unless otherwise noted.