"Every heroes has a minds of sacrifice their life to protect the things they loved. I will sacrifices my life to protect Karua. I was born for Karua and I will die for Karua...... that's something that's makes me proud about it!!"
– Mamoru Nirata's last word before his death, Chapter 188

Mamoru first appeared at Chapter 73, he is choose as one of the 30 players to be play at Real Account Tower.

After Marble explained the rules of new trial, the trial was started. During the trial, Marble's followers keep increasing which caused him easily overpowered Yuuma's groups.

Soon, Yuuma, Mizuki, Sayaka and Shuu went to protects everyone from being killed by Marble. Yuuma stated that he can't comes up a second plan at a moment so he don't know how to defeat Marble. While Yuuma still thinking about the plan, he noticed that everyone was crying due to being hopeless and can only rely on Yuuma's strength in the end.

Soon, Aiji said that instead of just sitting there to watching, they should just joins to fight as well and try their best to help Yuuma as much as they can. Then, along with every players come to faces Marble. During the time, Karua told Mamoru to not protect her due to she wanted to attack Marble all by herself. Mamoru deny it and asks her what happens to her baby if she died, which Karua reminded that she was pregnant. Soon, when a attack almost landed on Karua, Mamoru sacrifices himself to protecting Karua and killed by Marble. 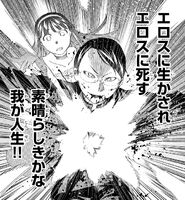