Mamoru Sakurame (桜芽 マモル, Sakurame Mamoru) is a mirror character introduced in the epilogue of Real Account manga series. He was the son of Akuto Saejima and Karua Sakurame.

Mamoru first appeared in the last chapter. As Mamoru was born, his mother Karua Sakurame gives him a name, Mamoru. His name was named after Mamoru Nirata, who died in the last trial of Real Account Tower from protecting Karua in 10 months ago. Karua also hope that Mamoru won't have the same fate as his father and the person named after him.

After everyone have some conversation, Yuuma Mukai welcomed Mamoru to the world of destruction but it still deserved to be loved. Soon, along with the others took a group photo and uploaded on Magura Aizawa's internet account. 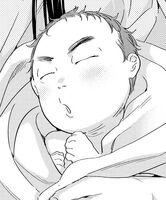 Retrieved from "https://realaccount.fandom.com/wiki/Mamoru_Sakurame?oldid=8030"
Community content is available under CC-BY-SA unless otherwise noted.