Masahide Eniguma (恵庭熊 雅秀, Eniguma Masahide), also known as President Marble (社長マーブル, Shachō Māburu) in the Third Season's final arc, is the President and Director of Real Account Co., Ltd. Along with Marble, he served as the main antagonist of the series.

Masahide reappeared in the final arc with the new title, President Marble. One day after the end of Fake News Island, Marble and Masahide was waiting for the remaining 15 players reach to the tower top. After they arrived on tower top, Masahide shown himself with Marble's mask, he asks them for what wish they wanted to grant first before they starts the new trial, so that it's easier for Masahide and the company to prepare it for them later. Then, everyone revealed their wish was hope internet world doesn't exists. Masahide cried for their wish because that is the main purpose why the Real Account incident happened in the first place.

In the whole conversation, it's revealed that Real Account's main goal was creates a new world where the internet and evils doesn't exists, so that people can be lives peaceful without getting trouble. Since Masahide now know what's the remaining 15 players' wish was same as his, he suggests Yuuma and his friends to joins their company so they will destroys the internet world together. Yuuma stated he won't join them and said that while what Masahide's thought about internet isn't wrong, the fact that he and his company killed so many innocent people just to archives their goal was ridiculous. Masahide doesn't agree Yuuma's statement on how he shouldn't kill people, and told him that his plan wasn't wrong especially with the existence of "No Smartphone Club". Yuuma then tells him that he has been made a promise of destroys Real Account company, and that he will use his own way other than killing to stop people using internet. After the conversation ended, Marble shown up and announced the new trial they will play was Real Foward Battle. 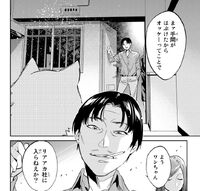 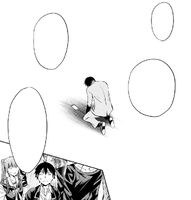 Retrieved from "https://realaccount.fandom.com/wiki/Masahide_Eniguma?oldid=7430"
Community content is available under CC-BY-SA unless otherwise noted.