Najimi was born in a ninja village, she trained herself for over 10 years to becomes a ninja.

Najimi first appeared in Chapter 72, she is chosen as one of the 30 players to be play at Real Account Tower.

During the fifth game started, every players must wears the school uniform.

Later before the Fake News Football was started, Yuuma Mukai and Mizuki Kurashina secretly informed Najimi about a "secret plan" that may will uses later, Najimi agreed with the plan and written she is ready for it. During the middle of third match, Yuuma lied Ataru Kashiwagi that Najimi is Yuri Kashiwagi. Because of this, Ataru thought Najimi was Yuri and wants to see her face. Although after Najimi revealed her real face, Ataru was shocked and realized that Yuuma was just lying, in order to get the real information football from Ataru.

After Marble explained the rules of new trial, the trial was started. During the trial, Marble's followers keep increasing which caused him easily overpowered Yuuma's groups. Soon, Yuuma, Mizuki, Sayaka Shiiba and Shuu Kuze went to protects everyone from being killed by Marble. Yuuma stated that he can't comes up a second plan at a moment so he don't know how to defeat Marble. While Yuuma still thinking about the plan, he noticed that everyone was crying due to being hopeless and can only rely on Yuuma's strength in the end. Soon, Aiji said that instead of just sitting there to watching, they should just joins to fight as well and try their best to help Yuuma as much as they can. Then, along with every players come to faces Marble.

During the time, it's showed Najimi can dodges Marble's attack easily. Shuu wonder how did she dodges Marble's attack, Mizuki explains that Najimi was in fact a ninja and she was born in a ninja village. After everyone successful to capture Marble, Yuuma went to punches Marble and they successful to "defeats" Marble. Although it's revealed that Marble is still alive, due to his followers has been increased to over 12 billions which almost same as Yuuma's. Soon, Marble's true identity was revealed to be Shin Kashiwagi, the father of Yuuma and his siblings. Soon after finished the conversation, the trial was continued and Shin's body becomes gigantic once again.

With this situation, Yuuma comes out a one last plan to defeat Shin, to surviving in 5 minutes and gives him a finishing blow at the last minutes. Soon, everyone starts run away and tries their best to dodge Shin's attacks, while informing internet users to helps them by follow Yuuma's account. During the last 5 minutes of the trial, Najimi was killed by Marble. 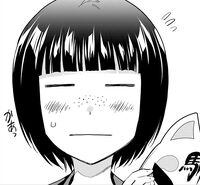 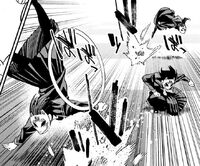 Retrieved from "https://realaccount.fandom.com/wiki/Najimi_Kurewa?oldid=7850"
Community content is available under CC-BY-SA unless otherwise noted.