Suzuri first appeared in Chapter 72, she is chosen as one of the 30 players to be play at Real Account Tower.

During 24 Hours Unscrupulous Hunting Campaign game, Suzuri is tagged with Shuu Kuze. For one days later, both Suzuri and Shuu meet Zui Zakuro and they were forced to joined his team.

During Zui fight against Yuuma Mukai, Suzuri and Zui's other teammate was watching the match. When Zui can't holds on anymore, Karin Koma tried to asked Suzuri and the others to helps him but they don't want due to they didn't want to losing their points. After Zui is defeated, along with the rest of the players who was in the factory was having their points steals by Hako and Aiji Hoshina. Suzuri and the others are thinking how to regains the points, Yuuma found a new plan to regains the points and it's successful. After the game is finished, along with Suzuri and Kanata Hidzuki was requested Yuuma to become their leader and he accepted. After Ataru Kashiwagi revealed Yuuma was suffered an "symptom" and showed Yuuma's "berserk form", Suzuri and the others were scared at Yuuma's action. Right after the celebration, Suzuri recieved her first sex from Rion Shikijiyou.

After Marble finished to explains how the new trial works, the trial was started. During the trial, Suzuri was thinking of have to fight Marble all by herself, in order to repay Yuuma for saves her a lot of times in the previous trials. Then, Suzuri went to faces Marble to fights him. Before Suzuri could do so, she was defeated and killed by Marble. 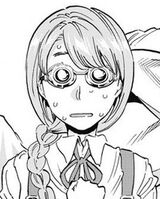 Retrieved from "https://realaccount.fandom.com/wiki/Suzuri_Mikura?oldid=7849"
Community content is available under CC-BY-SA unless otherwise noted.