Tamae Hanada (華田 タマエ, Hanada Tamae) is a character introduced in second and third part of story. She is a nurse and Mizuki Kurashina's follower.

Tamae was once in love with an man but it's ended up having break up their relationship. This caused Tamae feel so sad and think of wanted to suicide. So Tamae visits Mizuki Kurashina's suicide website to requested him to kill her. Although after seeing Mizuki in person, Tamae stopped her mind of having suicide, which annoyed Mizuki and wonders why did she requested it in the first place. Tamae becomes Mizuki's "girlfriend" afterward.

Tamae first appeared at Chapter 47, she healing Mizuki and Yuuma Mukai's wounds in the hospital. After Mizuki successful finished the special mission that need to scans Marble's mark, Tamae pointed out that SNS Hide-and-Seek trial was just become more and more ridiculous.

During August 27, when Mizuki's phone was ringing Tamae taking his phone and called Yuuma, which makes Yuuma, Ayame Kamijou and Chiho Fujimaki shocked that she is the one who taking the phone. Tamae wonders if Yuuma still remember her or not, he wonders if Tamae was in Mizuki's house or not, she said she didn't and stated that Mizuki is currently sleeping at her house. As Mizuki anwaken and claims that he didn't sleep, he realized that it's Yuuma calling him so he wanted to heard it as soon as possible. While Tamae tells Mizuki don't rushing, she said that it will be good if he have this much energy to do "some stuffs" in every night.

During Inverse True Follower Diagnosis trial, Tamae choose to follow Mizuki and become one of his followers.

Later during Real Account GO trial, along with Chiho, Imari Uzuki and Mitsuru Kariya was trying their best to helps Yuuma, Ayame and Mizuki for charging their battery life to them. Prior to 9:00 PM where Yuuma will having a rematch against Mizuki, Tamae brought Chiho, Imari and Mitsuru to Mizuki's house as Yuuma requested, in order to finding the things that Mizuki keep hiding from everyone. After knowing Mizuki has reunion with Yuuma and Ayame, Tamae was glad about it. But at the same time, it's also revealed that the trio's followers keep deceasing, due to the actions they did on the rematch. Along with Chiho and Imari were discussing how to get Yuuma, Ayame and Mizuki's followers back to them.

After Yuuma blocked Imari, Imari requests Tamae gives her smartphone to him so he can calls Yuuma for wondering what's going on. At the next day, along with Chiho, Imari and Mitsuru was watching the Anonymous Classroom trial in Tamae's house.

Tamae made a cameo appearance in Chapter 188 along with Mitsuru, when Marble's followers keep increasing.

During the last 5 minutes of Real Follower Battle trial, Tamae's account was blocked by Mizuki, as he wanted to sacrifices himself to saves Yuuma and hoping her to survive. Tamae was soon shocked at Mizuki's death, although it's later revealed that Mizuki is still alive. 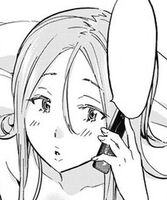 Retrieved from "https://realaccount.fandom.com/wiki/Tamae_Hanada?oldid=7968"
Community content is available under CC-BY-SA unless otherwise noted.