Tsugurou first appeared at Chapter 72, he is chosen as one of the 30 players to be play at Real Account Tower.

When Tsugurou arrived at the Real Account Tower, he stated that he came there is not because he wants to play. After revealed that Tsugurou have the lowest followers in the voting result, he acts as a Prime Minister to tried warned Marble and he will uses the power of the Prime Minister to call polices to catch him. Though what Tsugurou actually wanted is increasing his reputations. Soon, Tsugurou getting killed along with the rest of his followers due to he ranked as have the lowest followers in the voting result 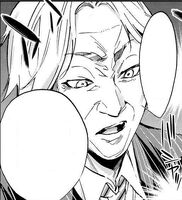 Retrieved from "https://realaccount.fandom.com/wiki/Tsugurou_Koujirou?oldid=7385"
Community content is available under CC-BY-SA unless otherwise noted.