Edit
watch 01:36
We're Getting Mutants in the MCU - The Loop
Do you like this video?
Play Sound

Yui first appears in Chapter 72, she is chosen as one of the 30 players to be play at Real Account Tower.

During Real Account GO game, due to Mikiya Sadamasu said to have a transfers pocket monsters events Yui were joined the event too, though it's stopped by Planning Department Chief Marble who showed to hunting the players and killed Mikiya. After Yuuma defeated Dr. Marble and win the game, Yui wanted to thanks him and tell him that he can touches her breasts as a present for him.

Yui appeared as one of the NPC character in Fake News Island, it's shows that Yui was bathing on a hot spring. Yui having a conversation with Hayato, that he wanted to apologize her for the causes of her death in previous trial, Yui said that he don't need to worry about it because that's the path she chosen. Hayato stated that while he wanted to become like Yuuma Mukai, he feel tried because of Yui's death and hope he can stay forever with her. Yui stated that Hayato don't need to scare and she will stay together with him forever, while Yui was dissipate from the hot spring and killed Hayato. 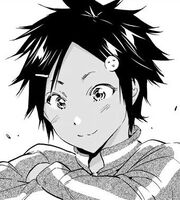